"This corner of West Sussex has been inhabited for centuries. A walk across any ploughed field will yeild a flint scraper or two, or a flint knife. Court Hill above the village is honeycombed with Celtic fields, the wooded hill across the valley is terraced with lynchets; ten Bronze Age round barrows have been recorded in the Parish. Quite lately a find of some coins and pottery in the village suggests there was an inhabitation here in Roman times. But when the Saxons came they probably found only deep forest here. From their settlement at Singleton they sought out clearings in the forest in which to keep their pigs; and from the huts of the swineherds grew up the villages of East and west Dean.
East Dean does not appear in the Domesday Book but ws probably included in the very large assessment of Singleton.
The appearance of the village cannot have altered greatly in the last century or two. Most of the older houses in the village date from the early years of the 17th century, one or two perhaps from the late 16th century. The old houses we see now are survivors of a disasterous fire in 1852 which swept away 8 houses and several barns and damaged others - rather unsightly slate roofs here and there show where the thatched roofs were destroyed."
(Source: exerpts from 'Guide to Churches - Blessed Virgin Mary Singleton; St Andrew West Dean; All Saints East Dean. Purchased from the Church)

A view across the village pond, the pond is visible on the 1880 map

A different view across the pond

This row of cottages is just over the pond, the road leads of Charlton and Singleton

Cows in their field next to Manor Farm, in the village

Cottages just down from Manor Farm, Pond Cottage is at the bottom of this road facing onto the pond. In the census of 1891 I have an entry for my WILD family, enumerated only one family away from Manor Farm which is the next abode to the left of these cottages. Could my family have lived here? The census just tells me "village" which would indicate a central part of the village. At the leat I imagine these are the type of homes my family lived in. 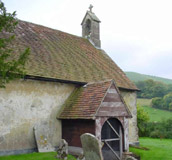